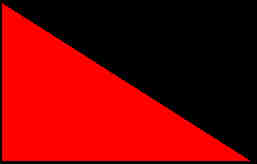 One of the most well known research results of the FICEDL - IFCLSD network is the Economical-Political World Map a.o.t. presented, discussed and agreed upon with general consent at the Anarchist Gathering in Venice 1984 and the libertarian gathering Technology and Freedom in Lisbon 1987:

Mathematically the map may be summarized in the following formulas:

Anarchy and anarchism mean "system and management without ruler(s), i.e. co-operation without repression, tyranny and slavery".

This is the general Formula of Anarchism related to the Economic-Political map. The degree of anarchy is defined for the Quadrant of Anarchism on the EP-map. in general the libertarian degree is used, i.e. also valid outside the anarchist quadrant:

in general, for the whole map, the authoritarian degree is used, i.e. 100% minus the libertarian degree.

If the authoritarian degree is not significant, i.e. less than 50%, outside the anarchist quadrant, the term semilibertarian system is used.

If the degree of capitalism is significant, > 50%, the system is economical plutarchy.

Very significant capitalism and/or statism also include the archies of rivaling "states within the state" (chaos), the tyranny of structurelessness (disorganization) and ochlarchy broadly defined.

If a system has insignificant degree of statism and capitalism, both < 50%, i.e. the degree of both autonomy and socialism are significant > 50%, and the system is anarchy and anarchism.

Anarchism vs other -isms defined by the 10 most basic principles

( 2 ) Archies may be expressed as x-archy, where x is one of a set of systems characteristics of archs, say, (mon, olig, poly, plut, ochl, matri, patri, hier, etc; but not an) or a logical union of several x-es reflecting different forms of archy/archies as opposed to anarchy/anarchies, i.e. the negation of x-archy = archies.

( 3 ) Possibility of anarchy. It is assumed that these terms reflect concepts that may be defined in a way that anarchy is not impossible in reality, i.e. the amount of anarchies in real terms is greater than the empty set, zero. Anarchy is matter of degree = tendency. Anarchy, i.e. an anarchist social system, may have 100% or a significant degree of anarchy, i.e. less than 100%, but above a given significant level.

( 6 ) Anarchism and other -isms. Anarchy is the negation of archies related to the economical and political/administrative dimensions, i.e. socialism and autonomy. Capitalism is economical plutarchy, including hierarchy and may be other x-archies broadly defined in an economical context. Statism is political/administrative monarchy, oligarchy, polyarchy, ochlarchy (mob rule), the archies of rivaling states within the state, i.e. chaos; and the tyranny of structurelessness i.e. disorganization, and/or political plutarchy, and it may also include other archies, say, being matriarchy, if the main rulers are women. Furthermore

Libertarian (in the meaning of 'libertaire' (french) or 'libertær' (nordic)), and real democracy (realdemocracy) are synonyms for anarchist, anarchy and anarchism. Anarchy and anarchism are sometimes called the third alternative, social form, or way. (This must not be mixed up with Tony Blair's non-anarchist "third way = neue mitte" of Gerard Schröder, or Adolf Hitler's "dritte reich".)

( 7 ) Significant level at 50%. Anarchy has less than 50% tendencies towards or of archies, x-archy, aggregated on the two relevant dimensions, on a scale from 0 => 100%. Thus more than 50 % tendencies towards or of archies, x-archy of relevant x-es, aggregated on the economic and/or the non-economic dimension, are not anarchist, not anarchy. Thus anarchy has 100-50% degree of socialism and 100-50% degree of autonomy, and archies have less of one or both, i.e. more than 50% degree of capitalism and/or statism.

( 9 ) Not totalitarian: The question of anarchism and anarchy vs archies is limited to the societal political-economical systems' management and coordination. What is interesting in anarchist perspective is whether or not the economical-political system has authority, i.e. ruling and rulers - or not, with respect to the societal managent and coordination. Other uses of the words anarchy vs x-archy and anarchies vs archies are principally irrelevant to anarchism, and should in general be avoided.

(10) Not valid concepts. Concepts as anarcho-archy = anarchy-x-archy in any form, meaning system, coordination and management "both with and without ruling and rulers" at the same time and place, are not allowed for, because such concepts are contradictive, and thus are nonsens and not logical and scientifical, because this is in reality not possible, and anarchism and anarchy is about realities. Thus anarcho-marxism, anarcho-capitalism = anarchy-plutarchy, anarcho-ochlarchy, anarcho-chaos, anarchy = chaos, anarchism = anarchy = minimal state or libertarian state, state in general, anarcho-statism, anarcho-authority, etc, are nonsens and not valid concepts, but confused Orwellian "1984" "newspeak" that is not anarchist, but authoritarian, i.e. chaotic, and should be avoided.

In addition to these axioms and most basic principles of social sciences, anarchy and anarchism and other -isms, other principles of policy defining authority more precise and concrete in a societal context, structural and functional, performance included, must be introduced, and the significant level of anarchy vs archies must be calibrated for applied and practical research and analysis. This is a.o.t. discussed on the file (click on:) http://www.anarchy.no/a_e_p_m.html , search for 'calibration' and 'principles'. See also the basic course of anarchism (click on:) http://www.anarchy.no/course1.html . The axioms (1) - (10) are consistent with the economical-political map above.

Short presentation of several affiliates of the FICEDL-IFCLSD network - French/English:

NB! Most of the centers of the FICEDL-Network and the other mentioned libraries are not very updated, especially regarding International Journal of Anarchism/Folkebladet ISSN 0800-0220 - electronic issues ISSN 1890-9485 since 2009, and AI-material in general, but Arbeiderbevegelsens arkiv og bibliotek, Oslo: ARBARKIV, is quite updated. If you want information etc. about the latest issues of IJA/FB on paper, etc. contact (click on:) ARBARKIV. Arbeiderbevegelsens arkiv og bibliotek, Oslo has a large collection of Norwegian and international anarchism. The ARBARKIV Website is written in Norwegian and English, click on the British flag, to see the English version. Search in the 'library catalogue'.